The two pizza rule is a guideline for determining how many people to invite to a meeting. According to the rule, every meeting should be small enough that guests could be fed with two pizzas.

Who came up with the two pizza rule?

The two pizza rule is frequently attributed to Jeff Bezos, the founder, and CEO of Amazon.

When Amazon was a startup, Bezos is said to have used ‘two pizza’ meetings and small project teams to encourage a decentralized, creative working environment.

How large is a 2 pizza team?

Let’s try to understand the basic concept of the two pizza rule: how many people do two pizzas feed?

A Medium pizza has eight slices and can feed two to four people. A large, 14-inch pizza can feed three to six people.
So, two large pizzas should let six to ten people eat comfortably – that’s the two pizza rule. It suggests that an important business meeting should not have more than ten people attending.

Jeff Bezos has provided words of wisdom on how to create and operate a corporation over the years.

One of his unforgettable behind-the-scenes moments occurred during an away retreat. There was a conversation going on about how to get organizations to communicate more when Bezos stood up and said:
“No, communication is terrible!”. His announcement surprised some of his managers.

“Communication is a sign of dysfunction. It means people aren’t working together in a close, organic way. We should be trying to figure out a way for teams to communicate less with each other, not more.” Jeff Bezos, CEO of Amazon

Bezos followed his concept of a decentralized, disentangled corporation in which tiny groups could create and test their visions independently of the rest of the company.

He originated the concept of the “two-pizza team”: if you can’t feed a team with two pizzas, it’s too big.

The explanation behind it is relatively simple. Bezos believes that no matter how big a firm grows if it can’t feed a team with two pizzas, it’s too big. More people equates to more of everything: more coordination, bureaucracy, and turmoil – anything that slows things down. Individual performance declines, and people lose interest.

Is the two pizza rule accurate?

There are a number of “links” connecting members in every group. In an interview with Harvard Business Review, organizational psychologist J. Richard Hackman used the term “links” to characterize the social connection of group members.

The more connections there are between group members, the greater the risk of being hampered by social and political barriers to maximum production and effectiveness. Hackman later revealed his own meeting-size shorthand, saying, “my rule of thumb is no double digits.” (just like the two pizza rule by Jeff Bezos)

That means that a three-person startup must maintain three links. Doubling the size of this team would result in a fivefold increase in the number of linkages to 15. A larger team of 12 people must consider 66 linkages. The number of links increases to 1225 for a group of 50.

The more ties you have to maintain, the more likely it is that mismanagement, misreading, and miscommunication will occur. The time and effort required to keep everyone on the same page quickly becomes a nightmare. You should update your management style for your business’s best needs and try to avoid creating too many links – this will give employees and more autonomy in taking decisions.

There is much data to back up the concept that group size dramatically impacts productivity. A group of business school professors tested the “team scaling fallacy” a few years ago by asking two- and four-person groups to create a Lego figure.
On average, the two-person teams completed the task in 36 minutes, whereas the three-person teams took 52 minutes. When just one more team member was added, productivity plummeted by about 50%.

Throwing more people at a problem is one of the most typical productivity traps, and not simply because it requires greater coordinating efforts. According to research, when the size of a group grows, individual members become less effective.

Ringelmann’s rope pulling experiment was one of the first to test this phenomenon. In 1913, Maximilien Ringelmann, a French professor of agricultural engineering, challenged volunteers to pull as hard as they could on a rope. He discovered that when only one person was pulling on the rope, they gave their all, but when more people were added, the individual effort decreased.

While each new member increases the team’s overall production, it does so at a fast declining rate. That is, if you are the fourth member of a team, you are more likely to have a greater impact on its productivity than if you are the 40th. 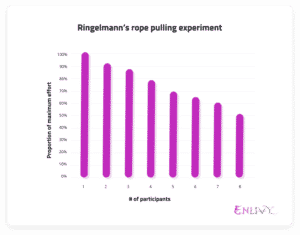 When members of a team slack off, the entire group dynamic transforms. Projects are becoming less efficient, responsibilities are becoming imbalanced, and other employees are becoming overworked and dissatisfied. The overall productivity of the team will decrease, and it will underperform.  This means we can say that two pizza team rule is true and smaller teams are more efficient.

The Enlivy Editorial Team consists of experts and professionals with years of experience building, managing, and growing a business.