The Big Five is a grouping for personality traits developed from the 1980s; These traits can hint at a person’s capabilities, habits, and way of approaching problems & life.

Big Five traits score in percentiles, the average mark at 50% ( fifty ), sometimes referred to as one of the two acronyms, CANOE or OCEAN

An agreeableness rating in the 80th percentile indicates a greater than average sense of community and sympathy with others’ feelings, while someone with a 5th percentile is quite the opposite.

Before diving deeper into the Big Five traits, it’s essential to understand that they’ll serve as guidelines, and point to what to look for. Scoring the 99th percentile for agreeableness might still insult people, considering this is a sign of a lower percentile in scoring. 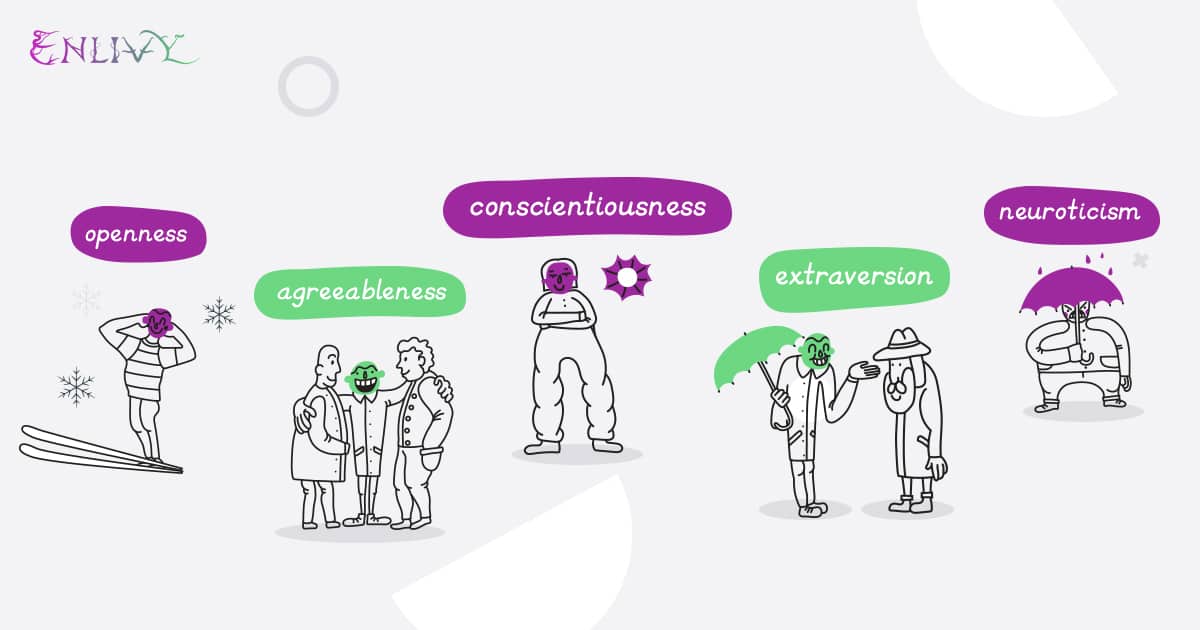 Those who score high on conscientiousness are organized, disciplined, detail-oriented, thoughtful, and careful, with proper impulse control, which allows them to complete tasks and achieve goals. Dutiful by nature, they plan, think about how their behavior affects others, and are mindful of deadlines.

Those who score low on conscientiousness may struggle with impulse control, leading to difficulty completing tasks and fulfilling goals, often guided by their impulses, which combined with their tendency for careless behavior can lead to chaos in certain situations.

This is one of the most relevant traits in my opinion, as low scorers usually require micromanagement, while high scorers can be macromanaged

This personality dimension focuses on trust, altruism, kindness, affection, and other prosocial behaviors.

Those who score high on agreeableness tend to be cooperative, sensitive to the needs of others, soft-hearted, trusting, and well-liked. People regard them as trustworthy and altruistic.

Those who score low on agreeableness tend to be competitive and sometimes even manipulative. They may be seen as suspicious, manipulative, and uncooperative, making them less likely to be well-liked and trusted.

This trait might be one the trickiest, as high scorers will integrate better in the company but might lack the competitive factor to push the boundaries to achieve the companies goals. In general low scorers have their ambitions when those ambitions align with the long-term company growth, it may provide excellent results, yet if they conflict, it’s going to get messy.

Neuroticism describes the overall emotional stability of an individual through how they perceive the world. It considers how likely a person is to interpret events as threatening or challenging, with a default to catalog new experiences with negative emotions

Those who score high on neuroticism are seen as moody and irritable; they feel anxious, insecure, and self-pitying, resulting in self-esteem issues and excessive sadness.

Those who score low on neuroticism are more likely to be calm, secure, and self-satisfied; more likely to have high self-esteem and remain resilient through challenges or complex tasks.

People high in neuroticism are particularly vulnerable to mood disorders such as depression. High scorers in neuroticism and conscientiousness may feel exhausted, as they’re always in a never-ending battle with themselves. This ying-yang situation is ideal for balancing the individual life, as scoring low in both would most likely result in a person that cannot be motivated by anything except short-term dopamine hits.

This trait features characteristics such as imagination and insight.

Those who score high openness prefer variety, learn new things, value independence, are seen as creative and adventurous, and always try new things, as their range of interests is broad.

Those who score low on openness prefer routine, are uneasy about change, and fear the unknown; they may struggle with abstract thinking, as they’re practical in nature.

Low scorers in extroversion are described as introverts, while high scorers are extroverts.

Extroverts are outgoing, assertive, and social; they’ll gain energy by being around others and prosper in social situations. They tend to be enthusiastic, likely to say **Yes!** to any exciting opportunities.

Introverts are reserved and quiet, and they prefer listening to others rather than needing to be heard; opposite to extroverts, they’ll recharge when they’re alone, as social events are tiring ( does not mean introverts do not enjoy parties or other social events )

Using the Big Five traits allows you to understand someone quicker, by allowing you to make multiple presumptions about a person.

Remember that behavior involves an interaction between a person’s underlying personality and situational variables. The person’s situation plays a significant role in how the person reacts; this includes the context of the event and what’s currently on his mind.

For example, sociable individuals tend to be talkative. However, these traits do not always occur. Maybe the person had an unfortunate event happen recently, and he’s not open to talking about it, putting resistance on the topic and neurotic behavior.

In most cases, people offer responses consistent with their underlying personality traits.
Ensure you have a proper sample size when making decisions using general concepts; having one event occur once doesn’t mean it will happen again, at least not in the same way or form.

I cannot wait for Enlivy to be out there. In the meantime, I'll occasionally blog about topics I find interesting